Another bus ride, followed by a long night train ride, followed by a subway ride and some walking… and we’re in Xi’an. The hostel we were staying at was definitely the nicest one yet and could easily hold up when compared to Western standards, but with its own style.

The city is most famous for the Terracotta Army site. The farmers who found the main pit with most of the terracotta soldiers by accident while digging a well in 1974, didn’t exactly celebrate their finding. In Chinese culture, seeing something that was meant to make its way into the afterworld, means bad luck. What’s that stuff still doing here, these guys were expected to be fighting for the First Emperor in his afterlife! So the farmers decided to keep it a secret, quickly covered it up and never talked about it again. This is until a bit later, when one of them told a friend about it over a beer or rice wine, and they convinced him to tell the government about it. (It‘s always “the government” that people go to with this sort of things.)

Back then, it was common to bury everything and everyone you needed in the afterlife with you alive – slaves, servants, concubines etc. That is, if you’re a VIP of some sort. Making objects out of paper and then burning them is another way which is still practiced today. But the First Emperor, whose army they found here in Xi’an, needed a bit more backup: He had made quite a few enemies that were waiting for him in the afterlife, but there weren’t enough warriors alive to protect him from them. So instead of just sacrificing them, making fake soldiers out of clay seemed like an excellent idea. And after 38 years of preparation, this is what he ended up with. They’re probably still fighting for him today.

The soldiers used to be painted in vivid colors, but all that has faded over the last 2000 years. It’s still very impressive to see though that every soldier has their own style: Different body types, clothes, faces… Racist jokes about all Asians looking the same aside, the soldiers actually all look different from each other.

The only downside to our visit here, and I know I’m repeating myself, are the hoards of tourists visiting China’s “standard attractions.” Build a museum, set up a glass cabinet, put anything inside – and they will just stream in with their smartphones and selfie sticks and take photos of things they aren’t even genuinely interested in at all. Enough moaning, it still was an experience.

I’ve also come across the best fake Apple Store I’ve seen so far. I took me a minute to debunk this one, but the pink and white coated Mac Pro towers gave it away. 😂 I’ve heard that some of the employees of the countless fake Apple Stores actually believe they’re working on an official one.

After having the best veggie dumplings ever at a popular gigantic dumplings only restaurant, 🥟 we explored the Muslim quarter of Xi’an. A lot of the stuff they sell as food here would seem as a test of courage to us. The tentacly stuff is definitely not my cup of tea, so I tried the liquid nitrogen boiled (frozen?) rice balls instead. They definitely look scarier than they are though. 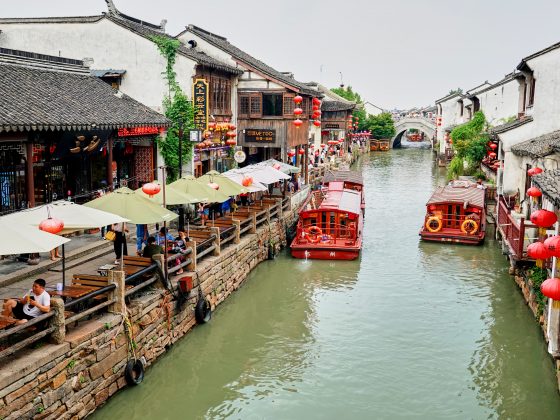