Chinese people are into jelly. It comes in all forms and sometimes in surprising places, for example as small cubes mixed into ice cream or as jelly threads at the bottom of your Starbucks drink. You can find bubble tea shops in every corner, and the ones I tried were different from what I know. Here the bubbles don’t explode into nothing when you bite them, but you have to chew them. And they’re very chewy when compared to the green jello “Götterspeise” stuff I know. Or how about one sealed slice of toast with butter and jam? I admit I was in a way disappointed to find that the veggie pizza I had ordered at a pizza place did not contain any freaky plants that wouldn’t belong in a pizza. It wasn’t even steamed or fried. 😉

To me, Chinese interpretations of Western food and drinks is just as exciting as genuine Chinese cuisine. The various versions of chips (try Lay’s cucumber), Oreos (grape & peach) and “French bread” have never disappointed my curiosity. How about a “Grapefruit Sparkling Ice Coffee” at KFC? I was guessing they were referring to tea, but it was actually grapefruit and coffee.

But Wuyishan is actually not about KFC and Starbucks. People come here for hikes in the mountains and rock formations: Hot, steep, beautiful view.

OK, back to food.

We went for a barbecue at a small street food market, where we just picked some raw stuff and had it grilled for us. As a nitpicking veggie, having my stuff all drenched in meat juices from every organism you can imagine is kind of a nightmare, but it was just too good.

Grilled eggplant is surprisingly tasty! The trick seems to be to grill it as a whole, using its skin as shield layer and to then cut it open when it’s all mushy inside. This brings out flavors you don’t get from cutting them into slices and then putting them on a barbecue. Eggplant has really grown on me in general. Grilled 🍆, fried 🍆, breaded and deep-fried 🍆, mashed 🍆, 🍆 in noodle soup… 🍆💦 (I just reminded myself of the shrimp guy from Forrest Gump.)

Last but not least 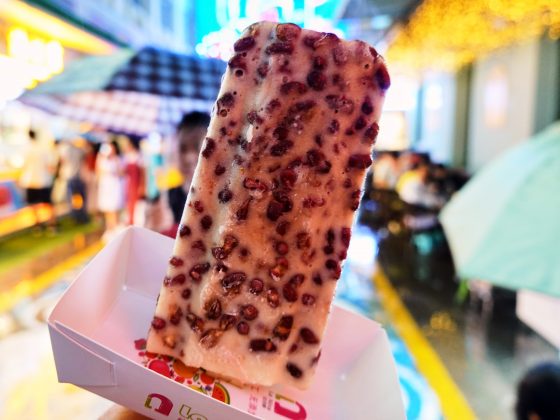