Kung Fu and the Shaolin Temple

Luoyang, especially the area around the Shaolin temple, is the home of Kung Fu. Our hotel was so up high in the mountains it nearly made the bags of chips we brought burst from the low air pressure. And it actually made a few bottles of toiletries leak all over of the stuff in our backpacks.

Seizing the unique opportunity of being here, I tried to make a few people watch one of my favorite movies of all time, Kill Bill, with me. But when two out of three had passed out from hiking-inducted fatigue, I aborted and rescheduled the mission. Simona, Nikki, Rob: I grant you a second chance!

The only fighting I did was against a giant wasp in our two-bed hotel room. After round one, which left the wasp only slightly injured yet very upset, we spent a few minutes outside, discussing the time span of an insect’s short-term memory. After round two, which ended with a victorious bloodstain on our floor, we explored the rest of the room a bit more. Highlight: The glass walls of our bathroom which were covered by a transparent curtain. So much for privacy. We had running water though which is a luxury, considered it has to be brought up there with trucks.

In the area around the Shaolin temple, there are dozens of Kung Fu schools. To start Kung Fu training in one of them, you have to be serious af. This is not about meeting twice a week for some fun. The kids here train up to 12 hours a day, starting their first session at 5:30 in the morning. Being hit by your instructor for not performing well enough is normal. It’s all about discipline here, as I learned first hand from a German Kung Fu student I met. By the way – he was the first German I met in China since leaving the airport in Hong Kong.

Many kids are even sent here by their parents as a punishment, or at least to learn discipline. Kung Fu training prepares you well for a military career, and a significant portion of these kids will inevitably wind up there. Late at night, even after 11 p.m., you still see 5-year-old boys training skillful moves, flips and handling swords and wooden sticks. It looks like they’re having great fun.

Using Google Translate to communicate with Chinese people very comical, especially on the rare occasions when you get past the “Where are you from?” and “Are you enjoying China?” questions. This came out of a chat with a seven-year-old. 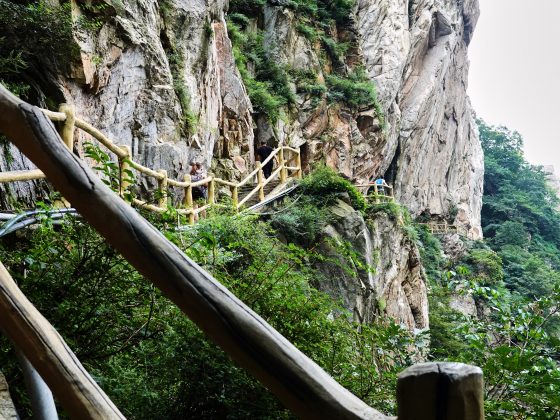